On July 28, North Korea conducted an intercontinental ballistic missile (ICBM) launch. The North Korean leader Kim Jong-un said the test proved that the entire United States was within striking range. The missile reportedly flew for 45 minutes, reaching a peak altitude of 3,000 km, and a slightly longer range than the previous test on July 4. If flown on a flatter trajectory, this missile could reach as far as 9,000 to 10,000 km. The re-entry vehicle landed in the East Sea or Sea of Japan inside Japan’s exclusive economic zone, according to the country’s chief cabinet secretary, Yoshihide Suga.

Analysts were concluding that a large part of the continental United States, including Los Angeles and Chicago, is now in the range of North Korean weapons. The Diplomat cites David Wright at the Union of Concerned Scientists, who reported that the Hwasong-14 may now be capable of flying to a range of 10,400 kilometers and potentially 11,000 kilometers. That means it could have reached Los Angeles, Denver or Chicago, depending on variables such as the size and weight of the warhead. Wright notes that if the unknown payload used for testing «was lighter than the actual warhead the missile would carry, the ranges would be shorter than those estimated».

China has been building up defenses along its border with North Korea amid tensions over Pyongyang’s nuclear program. The North Korean-Chinese border stretches 880 miles (1,415 kilometers) across China’s Liaoning province, an industrial and mining heartland prone to heavy smog and painfully cold winters. Beijing has established a new border brigade, built bunkers to protect civilians against nuclear blasts, and set up 24-hour surveillance along its frontier. According to a report published last month on the official website of the People’s Liberation Army (PLA), a «newly formed border defense brigade» is conducting patrols to gather intelligence.

The preparations for the July 28 launch had been reported before the test took place. The House Armed Services Committee held a classified briefing for all members of the chamber on July 25 to discuss North Korea’s intercontinental ballistic missile development. The briefing team included Rob Soofer, Deputy Assistant Secretary of Defense for Nuclear and Missile Defense Policy, Air Force Lt. Gen. Samuel Greaves, director of the Missile Defense Agency, and representatives from the DIA and the National Air and Space Intelligence Center. Even those Americans living on the East Coast, places like in Boston, Massachusetts, started to assess damage to be inflicted as a result of North Korea’s potential nuclear strike.

The latest launch put added pressure on US President Donald Trump to sign a bill passed by veto-proof margins in the House and Senate that would tighten sanctions on North Korea, as well as Iran and Russia. President Trump has said he will not allow North Korea to obtain a nuclear-tipped ICBM. According to the president, «a major, major conflict» with North Korea is possible because of its nuclear and missile programs and that all options are on the table. 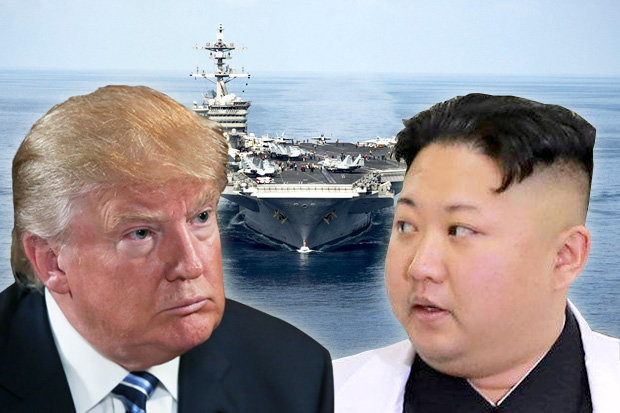 On July 21, CIA Director Mike Pompeo made it clear the US wants regime change in North Korea. «It would be a great thing to denuclearize the peninsula, to get those weapons off of that, but the thing that is most dangerous about it is the character who holds the control over them today», Pompeo said in a discussion moderated by conservative New York Times columnist Bret Stephens at the Aspen Security Forum. He continued, «So from the administration’s perspective, the most important thing we can do is separate those two. Right? Separate capacity and someone who might well have intent and break those two apart».

Last week, the Defense Intelligence Agency reportedly concluded that the North will have a reliable ICBM capable of carrying a nuclear weapon as early as next year, not two-three years as had been estimated before. By the next year, the program will have advanced from prototype to assembly line, according to officials familiar with the document.

According to The National Interest, the Pentagon has just released a new manual that lays out how the United States might destroy North Korea’s nukes. Army Techniques Publication No. 3-90.40, «Combined Arms Countering Weapons of Mass Destruction», explains US doctrine for neutralizing WMDs. The guidelines focus on the nuts and bolts of counter-WMD combined-arms operations by brigade combat teams, or BCTs. In other words, how regular Army combat brigades should deal with nuclear, biological or chemical weapons. Though the manual doesn’t specifically mention North Korea, many of its recommendations would apply should large formations of US ground troops enter the country.

Immediately after the North Korean launch, Joint Chiefs Chairman Gen. Joseph Dunford and Adm. Harry Harris, commander of US Pacific Command, discussed nothing else but «military response options» with Gen. Lee Sun-jin, chairman of the Republic of (South) Korea Joint Chiefs of Staff.

No doubt, the US has the first strike capability to knock out the nuclear infrastructure using stealth aircraft and sea-based standoff cruise missiles. In a surprise attack scenario, the primary tools for the task would be stealth aircraft, such as B-2 bombers and F-22 tactical fighters, and naval platforms. The overall number of sea and air-based long range cruise missiles in the first strike could be 600-1,000, with the second strike to follow soon.

At least two Ohio-class cruise missile submarines with more than 300 BGM-109 missiles could be secretly deployed off the coast. The B-2 Spirit bomber can carry a pair of massive 13,600-kilogram GBU-57 Massive Ordnance Penetrators to reach the targets located deep underground or 16 900-kilogram GBU-31 JDAMs. The GBU-57 is believed to be capable of penetrating over 60 feet of concrete. A USAF article stated it can penetrate 200 feet before going off. The US Air Force has 2,000 standard BLU-109/B penetrators with approximately 530 pounds of explosive packed inside to break through four to six feet of reinforced concrete. More advanced the BLU-137/B are to come into service beginning in either 2017 or 2018.

The Joint Direct Attack Munition (JDAM) is a guidance kit that converts unguided bombs, giving them a published range of up to 15 nautical miles (28 km). There were over 300,000 JDAM guidance kits as of November 2016, with 130 kits produced daily. According to the US Air Force, the system is accurate to within 40 feet (13 meters). When everything goes exactly right, the bombs generally hit within a few feet of their targets. The 21,600-pound (9,797-kg) GBU-43 (Guided Bomb Unit), one of only 15 ever built, was tested this year in Afghanistan. Called «mother of all bombs», it was dropped on the Achin district of Nangarhar, bordering Pakistan, from an MC-130 aircraft in April.

In November, 2015, the US and South Korea worked out a plan for waging an operation against North Korea, including actively detecting and destroying the weapons in an emergency. The parties agreed on pre-emptive strike plans against North Korea’s nuclear capable sites and weapons. The «4D Operational Concept» (detect, disrupt, destroy and defend) calls for more proactive responses in an emergency, letting Washington and Seoul attack missile launch sites or submarine-launched ballistic missiles without waiting for Pyongyang to strike first. Reconnaissance and high altitude drones have a special place in the plans.

In addition to the American arsenal, South Korean surface-to-surface Hyunmoo 2A, 2B and Hyunmoo 3 ballistic missiles, which have ranges of 300 km (185 miles), 500 km (310 miles) and 1,000 km (620 miles), respectively, could be used to strike Pyongyang, the North Korean capital.

The special unit known as the Korea Massive Punishment and Retaliation (KMPR) is to be mission-ready this year. It is created to decapitate North Korea by physically eliminating its leader Kim Jong Un.

Pyongyang has a 1.1 million-man army, including a mechanized infantry corps, an artillery corps, an armored corps, and several infantry corps. 13,000 artillery pieces deployed along the demilitarized zone, 30 miles from Seoul. It boasts around 1,100 tactical short-range and medium-range ballistic missiles, in addition to 100–200 intermediate range weapons (the Musudan).

North Korea has two aces up its sleeve. The South Korean capital is within its artillery range. 700 heavier guns and rocket launchers, plus the newer 300-millimeter MRLS, have the range to strike Seoul. North Korea’s inventory includes around 1,100 tactical short-range and medium-range ballistic missiles, in addition to 100–200 intermediate range weapons (the Musudan). North Korea can strike US forces in South Korea, Japan, the Hawaii Islands and the island of Guam. It can try to deliver a missile strike against Alaska.

President Trump is on shaky ground. With Trump’s job approval rating standing at only 40 percent in July, a rapid, victorious military action is the best way to improve the things and unite the nation behind him, while taking attention away from «Russia ties» stories, cadre shuffling and domestic and foreign policy failures. If he does not take action, his opponents will not waste time to accuse him of doing nothing to counter the growing national security threat. With no diplomatic solution in sight, a military conflict appears to be inevitable.