The Gaza Strip is a narrow strip of land on the Mediterranean coast. It borders Israel to the east and north, and Egypt to the south. It is approximately 41 kilometres long, and between 6 and 12 kilometres wide, with a total area of 360 square kilometres.
In 1948, the Gaza Strip had a population of less than 100,000 people. In the six day war in 1967 Israel captured Gaza along with the West Bank and East Jerusalem. By 2011, approximately 1.7 million Palestinians lived in Gaza, of whom almost one million were UN-registered refugees. 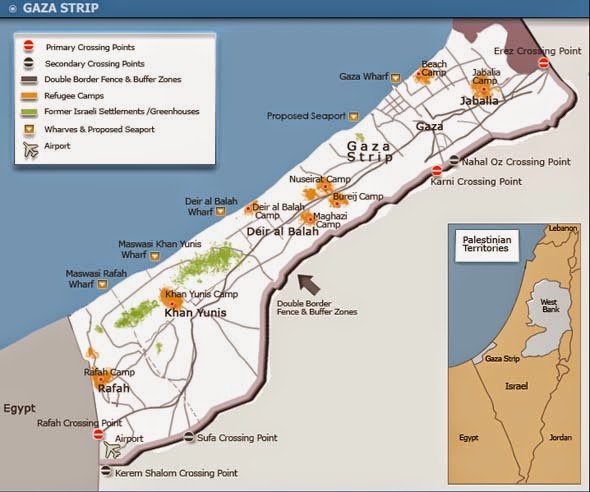 The tunnels connecting Gaza with Egypt covered approximately 60 percent of Gaza’s needs. But UN officials say that 80 percent of the tunnels linking Egypt and the Gaza Strip are “no longer fit for use” as a result of the strict measures taken by the Egyptian army, particularly since the July 2013 military coup.

The restrictions on food items, combined with the lack of employment opportunities and the huge reconstruction needs have pushed thousands of workers, some of them children, to risk their lives every day in the “tunnels industry”.

The volume of construction materials entering through the tunnels is over three times larger than through the official crossing.Gaza’s Ministry of Health is facing critical shortages of drugs and disposables, with 192 drugs (40% of the essential medicine list), and 586 medical disposables (65% of the essential list) at zero stock. Many of the drugs at zero stock are life-saving.

Israel has cut back on issuing permits to enter the country for the hundreds of patients each month who need immediate life-saving treatment and urgent, advanced treatment that is otherwise unavailable in Gaza.

Some patients, not allowed to cross, have referrals to Israeli hospitals or other hospitals. Since Hamas assumed control of the Gaza Strip, the number of patients forbidden by Israel and Egypt to leave Gaza “for security reasons” has steadily increased.

Prior to the second intifada which began in 2000, students from the Gaza Strip wishing to study abroad could travel via Israel’s Ben Gurion Airport, the El-Karama Bridge on the Palestinian-Jordanian border, Gaza’s International Airport, and the Rafah Crossing on the Egyptian border. Now, students are restricted to travel via the Rafah Crossing, which is also often closed.

The Palestinian Ministry of Civilian Affairs figures indicate that more than 2,722 students from all educational levels are waiting to re-join their educational institutions abroad. This number includes 722 students at university level. The remaining are students studying in schools abroad. The Gaza Strip’s sole water supply is a coastal aquifer. 90-95 percent of this aquifer is contaminated by sewage, chemicals, seawater and neighbourhood desalination facilities.

The UN has warned that by 2016, this water source could become unusable, with the damage potentially irreversible by 2020.

Households receive running water for only six to eight hours at a time: 25% of households on a daily basis, 40% every other day, 20% once every three days, and the remaining 15% only one day out of four.

Sewage and wastewater treatment systems in Gaza are also deficient. Some 90,000 cubic metres of untreated or partially treated wastewater flow daily into the Mediterranean, resulting in contamination, health hazards and damage to the fishing industry.Egyptian forces have destroyed most of the tunnels along the Rafah border.80 percent of Gazans buy their drinking water. This can cost up to 1/3 of their household income.

• The United Nations Office for the Coordination of Humanitarian Affairs Occupied Palestinian territory.

Gaza’s fishermen are allowed to travel a maximum of 6 miles (9.6km) out into the Mediterranean sea. This is less than one third of the fishing areas allocated to them under the Oslo Accords.

Israeli forces have committed over 250 violations against fishermen, including 106 shooting incidents which led to the killing of a fisherman and injuring many others.NAVAL BLOCKADETHE GAZA STRIPJust how small is Gaza?

*Areas are approximateHOW HAS HEALTH CARE BEEN AFFECTED? WHY THE TUNNELS?Denied freedom of movement, 1.8 million Palestinians are stuck in limbo, unable to enter or leave the Gaza Strip. As a result, they lack access to adequate medical care, and the ability to work and pursue education abroad.

Israel has a long history of isolating the Gaza Strip, subjecting it to many closures since the 1990s.

However, the blockade imposed since 2007, following Hamas’ electoral victory and subsequent takeover of Gaza, has been an unprecedented form of severe collective punishment.

HOW HAS IT CREATED A WATER CRISIS?HOW HAS IT AFFECTED EDUCATION?WHAT DOES THE FUTURE HOLD?WHAT DOES IT MEAN TO BE UNDER SIEGE?

Gaza’s electricity demand is about 360 megawatts a day. However, the sole power plant is only capable of producing approximately 80 megawatts a day. Israel and Egypt supply an additional 120 and 22 megawatts respectively, which is still short of the amount necessary.

Israel permits the entry of only enough fuel to run the power plant at 45 percent of the capacity needed to adequately supply the demand in Gaza.

AIR BLOCKADEStarting in 2000, Israel intensified its control and siege over Gaza’s airspace.

The first cohesive blockade of Gaza’s air, sea and land came in 2006 when fighters there captured an Israeli soldier, and was further heightened in mid-2007 when Hamas took control of Gaza.

The air siege over Gaza has had an overwhelming economic cost as well. Palestinians are not allowed to build their own airport or seaport, so the foreign trade of Gaza is solely conducted via Israeli ports.

BLACKOUTSThe entire Gaza Strip now experiences power outages of up to 12 hours a day, disrupting all aspects of life.

Al-Shifa hospital, Gaza’s main hospital, depends on four generators for its electricity. These generators are old and in constant need of repair. But the Israeli and Egyptian closure makes it very difficult to obtain the parts needed !!