After over 20 years of the futile “negotiations” the whole world (including the Palestinians) agrees that it has been fruitless.  It was aimless negotiations but a waste of time during which the occupation state of Israel has succeeded to shuffle the occupied land upside down and create deep demographic changes through accelerating the settlement that has never been done before.

Despite all the facts on the ground, some still hope to believe in that mirage and works to revive life in the dead body of the Oslo Accord. Still, some Palestinians are looking for an exit of some sort that would save them some self respect, or what has remained from their self respect, to prove that they can get something from a process that has resulted in nothing but more land grab, building settlements for more settlers obsessed with Talmudic heresies.

When talking of negotiations between enemies, it should be agreed upon from the beginning that there is a possibility for each party to recognize the other which  doesn’t exist in the Palestinian-zionist case. The Zionist party and since the very beginning of the struggle doesn’t recognize the existence of the Palestinian people, in the first place which was very clear from their deceptive slogan that was created in the early twentieth century of “a land without people to a people without land”. 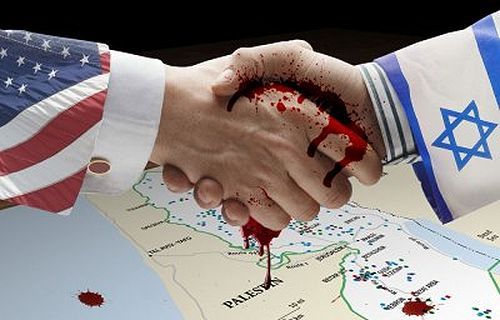 Accordingly, the Palestinian leadership should take this in consideration and understand the fact that the Oslo process will never lead to a durable or comprehensive peace with the Zionists, with a state that was created initially by terrorist groups who committed heinous crimes in documented massacres against the Palestinian people to establish their atrocious states built on Talmudic heresies, on the rubble of the Palestinian people.

Gambling to reach to any peaceful agreement, even at the minimum level, with the Zionist state of gangsters (especially at the deteriorating Arab situation) is more futile than it was at the beginning of the Oslo process in Madrid Peace Conference supported by the first Intifada which was continued secretly later on in the suspicious Oslo Agreement.

Trying to copy the Iranian style (of negotiating) and identifying with it can’t work in the Palestinian case and dragging the situation into the Syrian case is a leap into the unknown.

Working at going back to the same futile negotiations again is nothing but a fruitless game that should be stopped especially after the facts on the ground imposed by the Zionist occupation, which is very clear not only to the Palestinian people in the street but also to all the world leaders.

Finally, we think that the status cue is a thousand times better than pursuing the mirage of the endless negotiations, especially it is clearer now (which is a fact that we should admit) that the Zionist occupation state is not intending to reach to a peaceful settlement for the struggle, and it is not ready ( as it has never been  before) to agree that the Palestinians get an independent state with Jerusalem its capital, and needless to mention the Palestinian refugees and the Right of Return.

5 thoughts on “The Palestinians and the “State” Delusion”